Man is the Image of LORD God

Measure of All Things

Recently, I’ve been enamored with the book “Brothers Karamazov”. One of the chapters I want to share is the one in which Ivan Karamazov, one of main characters who is a staunch rationalist and atheist, is having a nightmare – with the devil.

I am not gonna talk a lot about the chapter, but I want to share a notion I got inspired from that particular chapter, particularly on a strong relationship between sin and secret.

Everybody commit sins. Rape, Theft, Voyeurism, Duplicity, Swindling, etc. Everybody commit certain trespass either to God, Others, or even Self. In response to this, some people confess or share the burden to somebody else to help them cope with it. It can be shared to God or Others. However, there are also some people who chose to keep it to themselves as a secret, only known to the person. This kind of people is the subject of this post.

When somebody keeps a secret to his / herself, it is certain that the person is not the only person keeping it. There are two entities who also keep it; both are omniscient in varying degrees. Those two are supernatural being; God and devil. Contrasting entity with also contrasting response against that secretive sin.

Assume that the God we know here is benevolent in all aspects, that He operates in level of wisdom unreachable to us. Assume also that the devil we are talking here is deeply devious and deceptive, capable of turning things inside out to his favor.

Let’t start with devil. Knowing your secret, what he will do is that he will use that secret as a leverage to keep you further down in that abyss of guilt. He will give you that pseudo-comfort that doing sin is fun but afterwards will be an advocate against you. Sly and duplicitous. He wants you to be a chronic sinner until your death.

God, on the other hand does hates sin so much that He ought to punish you in hell right away. However, He also loves sinner so much, and truly understand the sinful nature of man. When we confess our sin to God, He will not use the sin against us like the devil, though He actually is the one most rightful to do so. He will grant us grace which none of us deserve, the redeeming grace of His Son Jesus.

Like the parable of Prodigal Son, He will welcome us with open embrace, saying that our sins are already cleansed and that He already redeemed us, so a new life is there. You will still commit sin of course, but in each of those sins he will chastise every trespass we commit patiently, teaching us to live stronger in faith instead of flesh. In His time, with baby steps we will be uplifted with His grace from glory to glory. Our serenity is His aim, serenity in His fold. He wants us to be free worshipers of His glory.

How powerful God’s blood is, which redeems the sinner, granting a new life unimaginable. It is the power which turns a criminal into a crowned champion, which brings life to death, and is the only ever-hope in this sinful world!

Amazing grace – how sweet the sound, that saved a wretch like me!!!

That being said, one who constantly gives in to his / her impulses would be categorized as losers. One who can’t say no to the vices appear from dark depths of heart.

So, are you a loser or winner against yourself?

This is my first post this year. I would like to begin it with something optimistic. If you saunter by my blog you will see that I have some love of poetry.

Let me begin this year with a good poem from Rabindranath Tagore, a Bengali peripatetic polymath who is the first non-European to get a Nobel prize. He earned and enjoyed a lot of respect in Victorian Era, and thus meet a lot of dignitaries such as Albert Einstein, W.B. Yeats, Ezra Pound, Thomas Mann, Jawaharlal Nehru, and even Gandhi himself! A person ahead of his time, if I may add.

Without more chatter, here’s one of his poem which I guess good enough to capture optimistic and utopic spirit which I, and everybody ought to strive this year:

Where the mind is led forward by thee
Into ever-widening thought and action
Into that heaven of freedom, my Father, let my country awake

-Rabindranath Tagore, Where the Mind is without Fear

Continuing from my previous explanation on Trinity here (I recommend you to read it first), let me continue more on it.

One of the contending extremes we have in the world is the question of Unity vs. Diversity. University is one of the best example: Students are trying to find the Unity in Diversity and vice-versa. In real-world case though, these list might show in different disciplines the manifest contention between those two extremes:

Those are just few examples. Surely you can add more to it. In essence, though, surely you can see the underlying extremes within. People are trying to find which is best for them: Unity or Diversity? I conclude that both are true at the same time and we need both.

Trinity, in all its intricate mysteries is both Unity in Diversity. It is United in its Godhead (one God) and it is Diverse in its Persons (Father, Son, and Holy Spirit). Diverse in their roles: God the Father ordained, God the Son reedems, and God the Holy Spirit sanctify. Each role contributes one another into a united goal. I found that its transcendent simplicity reveals sure manifestations of immanent complexities we see in the world.

As Christian, I say that only by Trinity one can find both Unity and Diversity and  also by it, one will be able to live life positive holistically in this world where Chaos sometimes masquerade as Order or Vice-Versa.

One of the Epigma (Epic Enigma) that I’ve learned in my life as a Christian is the doctrine of Trinity. It seems to surpass common conceptions of God such as Monotheism and Polytheism. It is a bit like Monotheism but also has some Polytheistic nuances.

Simply put, Trinity says that God is both three and one at the same time. God IS The Father, The Son, and The Holy Spirit. However, each Godhead IS NOT the Other. Hard to picture them? This diagram called Scutum Fidei might makes it easier for you to understand: 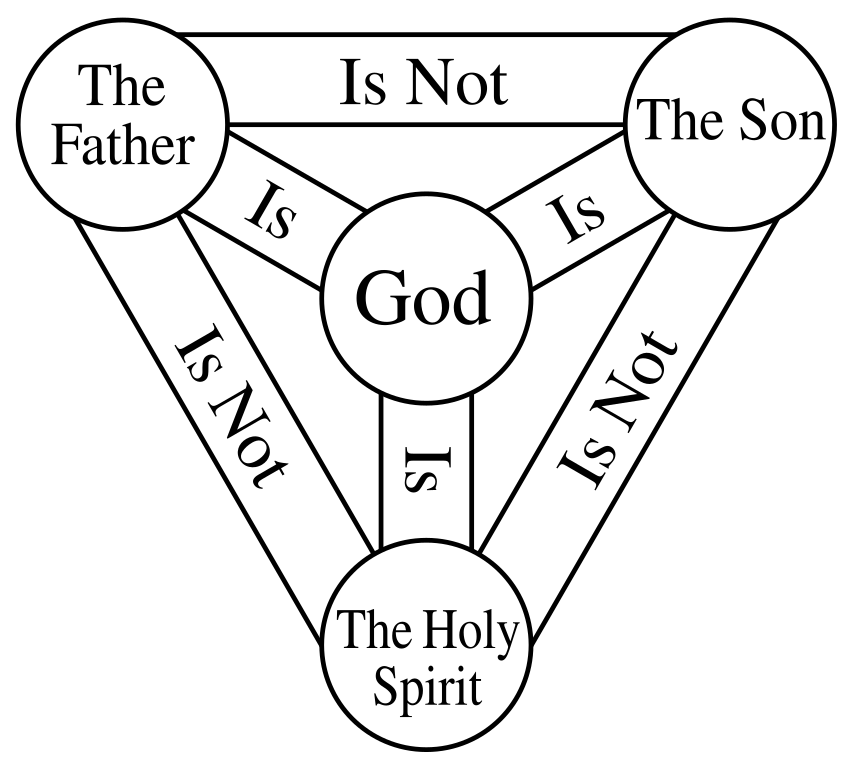 Still feeling that it is mind-bending or non-sensical? I tell you that it’s one of the hardest doctrines in Christianity. So don’t put too much pressure in understanding this if this is your first encounter. Even for us Christians nobody can fully comprehend or explain about this.

We know by logic that A cannot be A and Non-A at the same time. So how does this doctrine stands against simple logic test? I will simply answer since God creates logic, surely God operates on an infinitely higher logic than ours. I will even argue further that no human can ever comprehend or even master logic in a 100% way. So, how can we humans, limited and fallible, use a tool we don’t truly comprehend for an object infinitely greater than that tool?

Theologically, how can we Christians believe in this? As a Christian I say that it’s by faith; in the same way that by faith, Buddhist believe in Reincarnation, Hindus believe in their myriad gods, and Atheists “believe” in science. It does take A GREAT DEAL of faith for one to cross such metaphysical borders.

Thus my short explanation on Trinity. I will explain more on the beauty of it in the future so please stay tuned!!

Man is the Image of LORD God
Blog at WordPress.com.